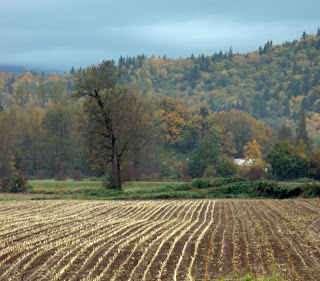 On October 28th, I attended the first public meeting called to get input from the public on the District of Kent (Agassiz) Draft Agricultural Area Plan.  Arriving late, I found the Public Open House hosted in the Agricultural Hall attended mainly by the document creators, Mayor, Council, the farming community, a developer and a scattering of residents; in short, a nice group of concerned citizens and respected members of the community.

Since reading the Plan I have to admit I swing from admiration of the scope of the plan to fear that it is too focused on the farming community and lacking sufficient input by other non-farmer groups.  Back to the Public Open House, there eventually was a question period and I gave my two-cents worth with the suggestion that more stakeholders need to be involved as the policies outlined in this document will clearly affect the town site (even individual titles) and the revenues of the District of Kent.

Mayor Lorne Fisher informed me that they had been all along looking for such stakeholder involvement but usually it is only at time of printing do they get the interest of people like me. What to say.  It must be a frustrating experience to spend countless hours on this type of project only then to have "people like me" start in with the questions.  I have to admit I am, maybe like a lot of people, operating on autopilot most days (and in front of my laptop like those pilots in the news) somewhat oblivious to what is going on in the world.  I do feel his pain though, overall, this a remarkable plan why poke it in the eye? Then again, why have a Public Open House at all?

He also told he that there was going to be a 2 week period in which more input could be sought. I am not sure this is good enough but it is what it is.

As the current District of Kent Council is dominated by people either living, working or associated with the farming community I believe it would be in the Council's best interests to have this document vetted through something other than the limited lens being offered.  How to do this?  Assemble a non-farmer stakeholder groups to work together and make suggestion with the assistance of hired planning resources.

Posted by Stephen Mullock at 8:57 AM