The quality of community is to large degree based on the services and amenities it provides for its citizens. That is why I was so pleased to learn and get reacquainted to some degree with the many infrastructure projects underway in Chilliwack. During a speech given to the Commercial Division of the Chilliwack and District Real Estate Board by Mayor Sharon Gaetz of the City of Chilliwack she outlined several projects due to open in 2010. I thought you might like to see a picture or two of them. 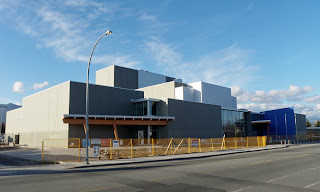 Chilliwack Cultural Centre
Chilliwack enjoys a deep cultural history but a good performance centre has been overlooked for many years to the benefit of sport facilities.  To put it more bluntly "it's about time".  The Chilliwack Cultural Centre has an opening date scheduled for September 2010 it will provide a 500 seat theatre, 150 seat recital hall, Art Gallery and music rooms.  The funds for this 22 million dollar Centre were saved over many years so that no new debt will be added to the City. 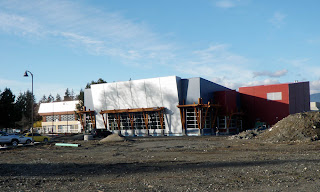 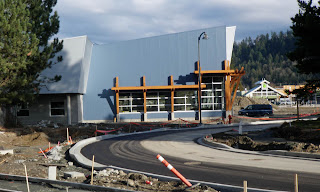 Cheam Centre Pool Addition Feb. 2010
Located within the Garrison Crossing Development, of which I written previously, the new Cheam Centre Pool is scheduled to open in April 2010 and will provide a 6 lane 25m lap pool, outdoor water park, sauna, hot tub and will with time involve badly needed renovations to the aged original Cheam Centre. 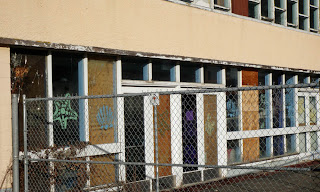 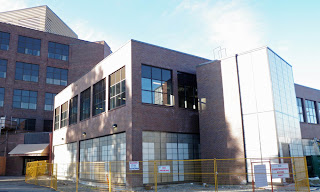 The Chilliwack General Hospital expansion is to open in April 2010 and will triple the size of the current emergency room, enlarge outpatient services and bring laboratory and diagnostic services closer to the emergency room.  There is a good article at the Chilliwack Progress site for more information.

With 3.8 million dollars in shared federal, provincial and city funding an expansion of sewer services will come to 295 Sardis properties in the Tyson - Stevenson Road area. Many of these parcels were developed 30 years ago and consequently their septic fields have a risk of failure. Chilliwack is reputed to have the 5th best water in the entire world so it is fitting that we would want to protect it. Good news underground. Nice to see that federal and provincial funding - it's appreciated.

The City has also received $450,000 from the Federal government to improve the sports field, tennis and racquet courts in Rosedale and Yarrow.

I was quite pleased to learn that there was so much underway and many projects due to open this year making Chilliwack, already one of the best places to live an even better one.

If you enjoyed reading this article, why not Subscribe to be notified of the next one?

Stephen Mullock is a Chilliwack real estate associate broker with 29 years of experience. He can be reached at Royal LePage Wheeler Cheam Realty, telephone 604-792-0077.


Click Here to hire Steve Mullock as your Realtor®, you’ll be happy you did.

Posted by Stephen Mullock at 10:46 AM