As discussed in the previous post the "Harrison" place name was first used in 1828 when Governor Simpson named the Harrison River in honour of Benjamin Harrison a deputy Governor of the Hudson Bay Company (HBC).  Because "Harrison" is a name assigned to such areas as Harrison Hot Springs, Harrison Mills, Harrison Lake, Harrison River, Harrison Bay etc. I thought it might be interesting to have a look at the man and his role with the Hudson Bay Company that in the early 1800s established itself with a series of Forts throughout our province, then called New Caledonia, for purposes of the fur trade.


The Royal Charter of 1670 gave the Hudson Bay Company immense powers which included the right to make laws, administer justice, undertake military action, wage war or make peace with non-Christian people as well as a total monopoly over trade in all territories drained by the Hudson Bay.  Wow, broad sweeping powers that in the wrong hands could be misused without recourse.

The Executive of the HBC was comprised of a Governor, a deputy Governor and 7 directors all elected from a meeting of the shareholders held in November.  Benjamin Harrison rose to the station of Deputy Governor in 1835-1839, but at the time of the naming of Harrison River he would have been a director. This was a man of considerable standing with the HBC; in fact, Benjamin Harrison was a shareholder and committee member for 47 years. To top things off his brother in-law Sir John Pelly (also a cousin) was Governor for 30 years at the HBC. 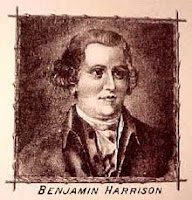 Benjamin Harrison was a devout Anglican and part of a Clapham evangelical sect that was dedicated to advancing humanitarian efforts such as the abolition of slavery.  They weren't so keen on the dissolution of the class system, still very prevalent in Britain at the time, even though they believed the disadvantaged had a better chance of being received in heaven.

Harrison was deeply concerned with the spiritual well being of the North American Natives and wished to see them converted to Christianity assigning a HBC Chaplain to the task. The First Nation people were terribly exploited through alcohol and it was important to Harrison that the HBC take a humanitarian stand on this issue as well as offering equitable trades.  Ideals that were likely at odds with the actual business being conducted thousands of miles away from London.

Benjamin Harrison was a Fellow of the Royal Society and the Society of Antiquaries and a number of other important boards in particular Guy's Hospital in London.  Harrison served a lengthy term as treasurer at Guy's handling this role as a bit of a tyrant and unpaid volunteer for fifty years.

It is always difficult to judge someone especially when the "times" are so different.  Was such an autocratic hold on the hospital necessary? Then again, to be an unpaid volunteer for 50 years is pretty remarkable. Also outstanding is, his re-election to the powerful HBC London Office for 47 years and his attempts to instill the need for fair trading practices with the North American Natives.  I am sure he had more than a few flaws, who doesn't, but, all in all Benjamin Harrison seems like a good candidate for the naming honours afforded him in this, then, remote, wild and dangerous corner of North America.

The best information about Benjamin Harrison comes from the excellent book "The People of the Harrison" (1990) by Daphne Sleigh and available for sale at the Agassiz Harrison Museum.


Stephen Mullock RI is an award winning full-time real estate agent with 30 years of experience and hundreds of sales. Thinking of buying or selling real estate in the Fraser Cheam communities of Chilliwack, Agassiz or Harrison Hot Springs? Contact Steve (click here) for experience, local knowledge and friendly service you’ll be happy you did.
Posted by Stephen Mullock at 1:16 PM