A Chilliwack Ghost Story - Part One 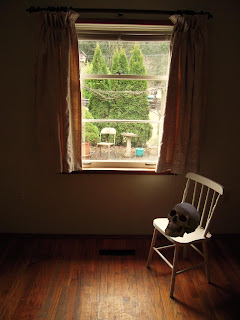 The "Thing" began its incessant pounding on the exterior walls of 150 Brooks Ave. Chilliwack in October 1951. It was so strong that it shook the building. Inside this home lived Anna Duryba, who formerly worked doing domestic jobs around the town, and her 14 year old niece, Kathleen.  The niece had moved to Chilliwack in May from Saskatchewan to be her aunt's companion.  They were convinced that someone was playing a prank on them.  They did not believe in ghosts.

A quick check around the home found nothing that would explain the banging.

The pounding continued, sometimes with the ferocity of a jackhammer boom - boom - boom for as long as an hour at a time.  Day and night the violent knocking kept them from getting a good rest.

Five weeks later Anna Duryba had lost 20 pounds and women were suffering from a mental strain, few can imagine, that was when the local Chilliwack Progress newspaper got hold of the story.

A bit about the property, this wasn't some sort of Gothic mansion or chilly castle rather it was almost the opposite. The property was a small little house with four rooms and a simple asphalt shingle siding exterior.  It stood on 4 acres of carefully tended raspberry canes and was close to another Brook's Ave. home owned by Anna's brother Alec Duryba.

Other times Alec and his niece would try and catch their tormentor in the act.  "We run outside when we hear it." he said.  "Nothing there.  Then we hear it on the other side of the house and we run around there - nothing there either.  Sometimes we go in opposite directions around the house but we never see anything."

Kathleen adds "I heard him once and ran to the window. I yelled "Go ahead, do it again, you silly fool." Right away I heard it again - bang - bang - bang - right under the window.  I was standing right there and see there was no one there."

Alec adopted a tougher strategy "One time I fired my shotgun twice into the raspberries." "I thought that might scare him away but right after that I heard it again". "I was standing there right in front of the window and I could hear it and the window rattling, what was I suppose to do - shoot the gun into the window?".

Day and night the pounding continued, spot lights were installed, the house was surrounded by neighbours but as always nothing was seen. Possible culprits such as an electrical problem or something wired into the service of the dwelling were tested by shutting off the power - but the knocking continued.

In a search for an explanation, Anna seemed to remember a man dropping by and asking her how much she wanted for the place. "We told him it wasn't for sale but he said he wanted to buy a little place and he liked this. He came back another time when I wasn't home."  Reader please always use a Realtor®.

Reverend W. J. T. Clarke, pastor of St. Thomas Anglican Church suggested that the strange happening at 150 Brooks Ave. Chilliwack might be the work of a poltergeist. "Strange noises and objects moving through the air - in this case stones* - are the most common. Usually, there is little damage done and there is no apparent logical reason for it all." Rev. Clarke said.  He went on "The inexplicable occurrences are usually associated with one person. When that person leaves the scene, the happenings usually stop."

A deputy sheriff, Al Edwards became the special investigator of this case and was posted every night in the house.  He said, "No explanation has so far been made as to how the noises in the home are caused.  These bangings have occurred as many as 30 times in a single night and have been heard by people standing within six feet of the spot.  The bangings, violent enough to shake windows visibly, move rapidly about the outer walls of the house".

A host of natural causes were considered including, radio station, aircraft beam transmissions and possible subterranean effects from minerals and the nearby mountains without success. Hundreds of spectators began to turn up on the street and the driveway to 150 Brooks Ave. Chilliwack was blocked off.

Kathleen, was taken to Vancouver both for her health and to test this notion that the work of a poltergeist was the cause of the strange knocking, window tapping and window breaking.  For three weeks the Thing was quiet.

Check back by October 28th for the conclusion of the Chilliwack haunting.

Notes
*  All members of the family had by this time  been struck by small stones.

Stephen Mullock RI is an award winning full-time real estate agent with 30 years of experience and hundreds of sales. Thinking of buying or selling real estate in the Fraser Cheam communities of Chilliwack, Agassiz or Harrison Hot Springs? Contact Steve (click here) for experience, local knowledge and friendly service you’ll be happy you did.
Posted by Stephen Mullock at 4:12 PM