Stephen Mullock
is an award winning full-time real estate specialist with 30 years of experience and hundreds of sales. Thinking of buying or selling real estate in the Fraser Cheam communities of Chilliwack, Agassiz or Harrison Hot Springs? Contact Steve (click here) of Royal LePage Wheeler Cheam Realty for experience, local knowledge and friendly service you’ll be happy you did.
Posted by Stephen Mullock at 10:11 AM No comments:

RETURNING FROM STONE
By Stephen Mullock

PART ONE
It had forgotten how many seasons had gone past. It just lay there with the other stone as the water of the Fraser river flowed over it. A hundred, 500, 1,000, 10,000 years? Sometimes the river was angry and the rocks were stirred from their slumber. She tumbled with them. On quieter days canoes, then motor boats, floated by with fishing hooks looking for salmon which swam in great schools of silver, red, black and green. The fish sometimes nudged her on their mad dash back and forth to the ocean. She liked that.

In winter the river shrank no longer being fed by snow melting, only the rain and the occasional snowy day made the water swell. As the world froze and the water retreated she was exposed to the sun on an open gravel bed, dried, felt currents of wind instead of water. She watched the eagle in the sky, the sun, the moon and the stars at night.

As many seasons rolled by she forgot that she had been a tool, she had lay so long with the other rocks. She was now as they were, stone. 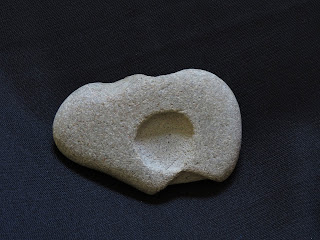 One day a man picked her up. She, once again, felt the warmth of the hand of man. She was lifted from her rocky bed into the air, turned over and examined. She felt a finger feeling the circles on each side of her broad faces. The edge still sharp on her side. She felt thumbs try to make sense of the rough grooves oppose her edge. Rough, she thought, to help with the grip as they applied pressure to the work. She worried that she might be thrown back into the river or onto the gravel but the man placed her in his pocket and took her home.

An eagle soaring high above turned towards the mountains as we gingerly picked our way through the extensive gravel beds of the Fraser river. Easy to take a misstep, turn an ankle and fall. The river was low at the moment but soon it would swell once again with the spring water. You could already feel a well of fresh, mountain air following the swiftly moving currents.

I took a rock and hurled into the Fraser it landed with a satisfying deep sounding plop.

The sun was shining, warm on my face. I had my camera slung over my shoulder and was scouting out possible photography sites to shoot when the light got right. Something to share with the other members of the Agassiz Harrison in Pictures Facebook group.

I stopped and it was right at my feet. Had I been walking a couple feet right or left I not sure I would have noticed it at all. I found it or it found me. 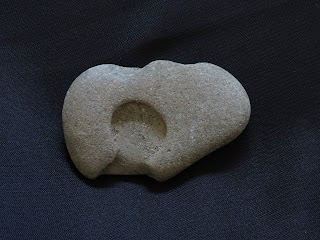 It kind of looked up at me with an empty eye socket a little larger than the size of Canadian two dollar coins, the “toonie”. The rock was the same colour as all other gravel around it - stony grey. I picked it up, the stone was cool in my hand. It reminded me of a stylized grizzly bear.

I ran a finger into its cavity about 1/8 inch deep with a well defined edge. Did erosion cause this? Wouldn’t erosion make the edges smoother? I turned the stone over and found a second “eye” socket of similar size. Between the two, along the side was a well defined edge. Exactly opposite that edge - two rough grooves. I placed my thumbs in them. They fit perfectly.

My excitement grew. What were the chances that the broad faces of a stone could erode on different sides in parallel fashion? Exactly opposite one another? Was that even possible?  Then I found a well defined edge along the side and what appeared to be thumb grooves across from one another. My guess was the odds of all this happening naturally were slim and none.

It kicked my imagination into overdrive.

Was this an artifact? How long had it lay on that gravel bed? Had it moved down the river? Had it been dropped from a boat? Thrown away? What was it?

There was a part of me that wanted to keep it, it is a beautiful object, but, it also might be an important part of the history of the Stó:lō, the people of the river and I thought that it should be returned. I contacted Chief Ralph Leon Jr. of the Sts'ailes people he welcomed the chance for recovery, but first, I wanted to see if I could find a little more out about the artifact. I sent some pictures to Dr. Schaepe, Ph.D., Senior Archaeologist, Stó:Lō Research and Reource, and quickly got a response, just not the one I was hoping for.

Hi Stephen - Thanks for contacting me. From the photos, this looks to be a naturally formed river cobble. I have seen many like it and they are often taken as cultural forms. It's a very interesting looking cobble, but most likely what is called a geofact, rather than an artifact. In any case, enjoy this interesting find and don't hesitate to contact as needed.
All the best -
Dave

Disappointed, I convinced the Doctor that maybe we should meet so he could get a look at the actual object. We did. Dr. Schaepe did express some interest in the thumb grooves saying they could only be created by strikes from different directions, but seemed not overly impressed and certainly not willing to call it an artifact.
I let Chief Ralph Leon Jr. know what I had found out, he was still interested but assigned another member to meet with me.

So readers what do you think? Any idea what it is?
Stephen Mullock
is an award winning full-time real estate specialist with 30 years of experience and hundreds of sales. Thinking of buying or selling real estate in the Fraser Cheam communities of Chilliwack, Agassiz or Harrison Hot Springs? Contact Steve (click here) of Royal LePage Wheeler Cheam Realty for experience, local knowledge and friendly service you’ll be happy you did.
Posted by Stephen Mullock at 11:51 AM No comments: