May there be peace within 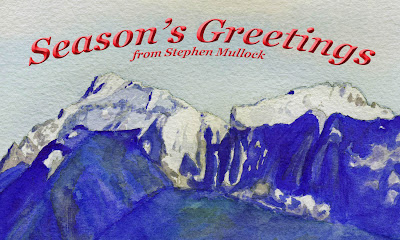 
May there be peace within.
May you trust that you are exactly where you are meant to be.
May you not forget the infinite possibilities that are born of faith in yourself and others.
May you use the gifts that you have received, and pass on the love that has been given to you.
May you be content with yourself just the way you are.
Let this knowledge settle into your bones, and allow your soul the freedom to sing, dance, praise and love.
It is there for each and every one of us.


Derived from a prayer of St. Theresa

Cheam and the Great Ice Giant 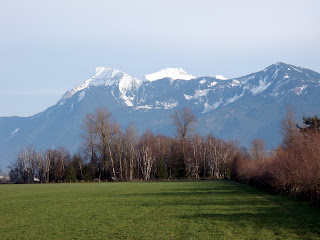 I am still very much on the hunt for stories and legends about Mount Cheam the most dominant landmark in the eastern Fraser Valley.  Yesterday, I took the picture above and also dropped into the Agassiz Museum to see if they could provide me with some information about the angel legend.  Unfortunately, the ladies there could not help me much with this legend but they were helpful with other stories.  By the way, the Agassiz Museum is a terrific little small town museum well worth your time and visit - call ahead in the winter as there are limited hours of operation. 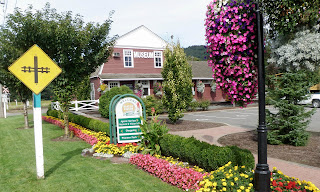 I found out that the peak is also known by the Pilalts indigenous people from the village at Cheam as See-am (Chief) Mountain.  That Cheam "wild strawberry place" is the name of a nearby Indian Village. There was also this story of a Great Ice Giant.

To quote from a Vancouver Sun article published in Jan. 1952 by L.R. Linton
The Pilats Indians called it Che-ahm, the Chief.  On its wooded slopes the Pilats picked berries, and tribe made offerings to appease the Great Ice Giant that hovered over Cheam.  Avalanches and snow slides used to hurl down its slopes bringing death and destruction, and the Indians believed the displeasure of the Great Ice Giant had been incurred."

The First Nation people of the area had reason to fear the mountain a slide from Cheam estimated to be 3 times as big as the Hope Slide buried a native village some 5,000 years ago.  This is the largest known catastrophic landslide in western Canada with debris fields 30m in depth.

Now the story of the existence of a Great Ice Giant (glacier) was discounted in that article in 1952 as a myth.  I however found something that would tend to support the idea of a glacier behind and above Mount Cheam and the evidence is in Spoon Lake.  In the photograph that follows you can see a small circular lake with a steep embankment as if something with a great deal of force had struck the earth.  When I saw this lake I thought meteorite but it may in fact be a kettle lake.  This is caused when a big chunk of ice surrounded by sediment falls from a great height then melts away leaving a depression and a lot of water. Imagine a big ball of ice bouncing higher and higher as it falls or a one becoming airbourne from a natural glacier made "ski jump".  Could Spoon Lake be the result of such an event falling from a Glacier perched on Lady Peak (Dog Face)?  If it is how old is the story about the Great Ice Giant. 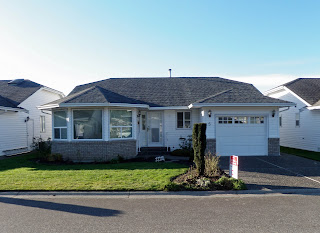 If you enjoyed reading this article, why not Subscribe to be notified of the next one?
Posted by Stephen Mullock at 12:10 PM No comments: