BC Hiking - My First Hike


I got a call late on Tuesday night from my friend Helle,"Steve, we are going hiking tomorrow and I was wondering if you would be interested"?

The Chilliwack Fraser-Cheam area is next to some of the best hiking in the world, from lofty peaks, to valley trails the sights are unforgettable and uniquely west coast. I said "I'm in".

At 9:00 am the entire group was assembled at the Popkum roundabout to meet and carpool. There was a nice mixture of beginners, five of us including a couple visiting from Denmark and 3 experienced leaders including my friend Helle. I should mention the dog - Takoda a mixed breed with a wonderful attitude and terrific poser. After introductions we were off to a section of the Trans Canada Trail and former Kettle Valley rail line up the Coquihalia Highway.
The couple from Denmark, turned out to be father and daughter named Ulf, somehow I heard Wolf, and Rosa, I thought was Rose. Ulf and Rosa were coming close to the end of their month long holiday in western Canada. They had already enjoyed the Rockies and been out on a hike just two days prior.  In contrast I hadn't hiked for a decade and, okay, I am also carrying a few extra pounds.

One concern of mine when hiking is bears but I was reassured to learn that the group is quite chatty thereby advertising its presence in the forests so that no bears are surprised, they then have time to retreat.  Sometimes hikers wear bells on their backpacks for the same purpose. Bear spray, bear bangers are also kept readily at hand.

I asked Wolf, "How can you tell whether you are in Grizzly or Black bear country"?  He told me that a massive shoulder hump gives the Grizzly bear away; that and the hiker bells found in Grizzley scat (poop).


We turned off the Coquihalla Highway 5 at the Portia intersection, parked, shouldered our packs, wiggled through a massive yellow gate and began walking, it was 9:45 am.

This hike, the Coquihalla Summit Trail, took us along in part down the former Kettle Valley Railway and in part along the Trans Canada Trail.  The grades are not difficult.  It soon became evident that along with mushrooms a riot of wildflowers were in bloom and the photographers in the group were given time to take some pictures of them. 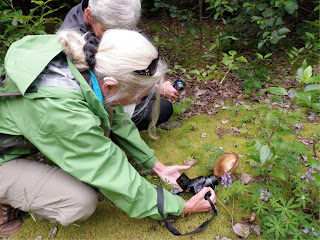 Through a forest canopy we walked. 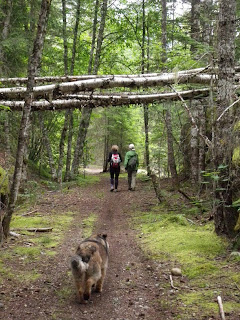 The wildflowers were quickly named by our leader Sue and Tracey and included Hawk-weed, Red Columbine, the delicate forest Tiger Lily, Red Paint Brush, Yellow Salsify, Oxeye Daisies and the list just goes on and on....

My favourite plant were the wild strawberries. These berries although "pea" sized packed a real punch of flavour putting store bought strawberries to shame. 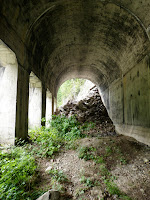 At 1 o'clock we arrived at an old railway snowshed and had a break for lunch. I was ready for a rest and a chance to explore this old structure.
We could tell from some of the dates stamped into the concrete that a lot of railway work had been done in 1944 and 1956 and couldn't help but think when, and why, it was decommissioned. This dramatic tag may tell the tale as to when.

After our break we continued on through a second train tunnel and then to the "Hole in the Wall".  The “Hole in the Wall” is a circular hole approximately 4’ in diameter cut through a solid granite wall. It is open to the sky for about 8’ and then it falls into a lower opening and finally emerges as a waterfall. The following photograph does not do it justice.
Hiking it turns out is a great way to get to know people and talking helps those miles disappear. At about 2 PM we turned around. This time fewer pictures were taken, the party was on the march!

A blister on my right heal began to form, fortunately these hikers are well prepared and a band aid solution materialized. A few miles further my left heel began to complain and a second a band aid was offered. About 5 pm my wife called to "ask where are you" in a hushed tone I said "we are still walking...that is hiking... I'm all in."

A day later, I am feeling fine and looking forward to another hike in the near future.

Interested in hiking in this spectacular part of the world? Here are some handy links:

Stephen Mullock RI is an award winning full-time real estate agent with 30 years of experience and hundreds of sales. Thinking of buying or selling real estate in the Fraser Cheam communities of Chilliwack, Agassiz or Harrison Hot Springs? Contact Steve (click here) for experience, local knowledge and friendly service you’ll be happy you did.
Posted by Stephen Mullock at 11:50 AM No comments: 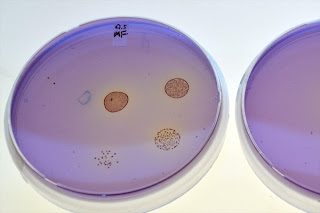 Canada's experimental farms are celebrating their 125th birthday and last Saturday the Agassiz Experimental Farm opened its' doors to visitors like me.  The Agassiz Experimental Farm is not quite 125 years old as it was established as one of Canada's original 5 farms by William Saunders in 1888. Saunders was taken by the almost tropical farm environment Agassiz presented and the relatively mild winter conditions.  In the following years since a host of tropical plants have been grown including lemons, limes and kiwi. Unfortunately, for such trees, it seems the farm is still too far north.  While the farm was initially used to evaluate livestock and fruit trees suitable for the climate today it is a modern, state of the art, research laboratory and dairy.  It is one of our area treasures.

It takes a great deal of work to organize an Open House for the public and I'd like to thank the employees of the Agassiz Experimental Farm for the interactive and  fun way they presented their work.  Here are a few pictures of the day.


Stephen Mullock RI is an award winning full-time real estate agent with 30 years of experience and hundreds of sales. Thinking of buying or selling real estate in the Fraser Cheam communities of Chilliwack, Agassiz or Harrison Hot Springs? Contact Steve (click here) for experience, local knowledge and friendly service you’ll be happy you did.
Posted by Stephen Mullock at 11:46 AM No comments:

Harrison Hot Springs Festival of the Arts 2011: A Cultural Mash-Up


These are the days, when music, art, craft, sun and beach blend and merge into the Harrison Festival of the Arts.  My friends what fine days they are, with a mash-up of international sounds and people, a celebration of music, theatre, dance and visual arts on every day until July 17th, 2011.

What does a cultural event, like this festival, have to do with real estate you might ask?  Other than the fact that I have a wonderful house and workshop at 241 Balsam Ave. for sale at $459,900 and a tidy, furnished one bedroom apartment for $274,900 at 328 Esplanade Ave? [Shameless and unapologetic plug].  In the Village of Harrison Hot Springs, isn't it just more entertainment in a world whirling with voices clamouring to be heard?  Hey, you can stay at home and watch "America's Got Talent" or rent a DVD and never leave the cocoon of your home or, grab a lawn chair, step out and saunter down to the beach.  Your life will be the richer for the experience, I know mine has been impacted and I believe that our local communities are better for it.


I was brought up Chilliwack, BC then a small town of 20,000 located within the Fraser Cheam area of the eastern Fraser Valley. "Canada" in the early years of my life was divided between Canadian English, the local Canadian First Nation people and a distant Canadian French.  Here on the west coast, "French" was more an acknowledgment, but still an important one, to a larger Canadian commitment.  My "French" was taught by a chain smoking teacher who would plug us into headphones and a taped program of instruction and then, he would slip out to his real interest - the dark room. Canada has changed; the "World" has come to realize that this country isn't all igloos and polar bears. With these new peoples, carried to Canada, in their spirits and minds, has come the art, music, theatre and ideas of a planet.  Some of the best are being presented right here at the Harrison Festival of the Arts. Imagine living in a community supportive of such an embraceable philosophy of inclusion and evolution - that's where you should live.  They say the "World needs more Canada" for the next few days it is alive and well at the Harrison Festival of the Arts.

Here are some pictures I snapped off this weekend, I hope you enjoy them.


Just underway and running every day until July 17, 2011 the Harrison Festival of the Arts, bring your friends and if you see me there say hello or "bonjour".

Stephen Mullock RI is an award winning full-time real estate agent with 30 years of experience and hundreds of sales. Thinking of buying or selling real estate in the Fraser Cheam communities of Chilliwack, Agassiz or Harrison Hot Springs? Contact Steve (click here) for experience, local knowledge and friendly service you’ll be happy you did.
Posted by Stephen Mullock at 11:41 AM 1 comment: