This past week I had a chance for a return hike up Chilliwack's Elk Mountain and as always my attention was drawn to beauty of Mount Baker in nearby Washington State.  Climbing Elk, Mount Baker is at your right shoulder and it is not until you hit the alpine meadows. ablaze with flowers this time of year, do you see good views of the nearby volcano.

While Mount Baker is concealed from everyday enjoyment of most Chilliwack residents, by the Cheam Range, it still remains of local significance.  This article looks at the naming of the mountain and its' Chilliwack connections.


I like to imagine the young Lieutenant's view might have been similar to this picture I took from a BC ferry; Mount Baker looming over the City of Vancouver in a most imposing way. 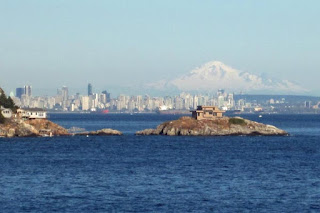 The Third Lieutenant Joseph Baker may have been surprised to discover that his namesake is a volcano. Mount Baker has the second most thermally active crater in the Cascade Range after that of Mount St. Helens.

While Mount Baker remains a potent pillar of fire, eruptions, are rare. In December 1880, Will Branchflower of Chilliwack to a Sunday school group in Atchelitz and reported all the previous night "the sky was so bright that you could read a newspaper by it" and that the daylight was filled with bright red clouds of acrid smoke.  Since then the mountain has remained silent.

According to First Nation legend, Mount Baker is the husband of Mount Cheam, although it seems that they are having a separation of types. As recounted in one of my earlier articles Mount Cheam Local Legend  the story I like comes from “Five Corners the Story of Chilliwack” by Bruce Ramsey as set down by Oliver Wells it says that they had three sons, Mount Hood, Mount Shasta and Mount Shuksan and three daughters who are younger than the boys.

Cheam got tired of being away from her people and left so that she could look after the Sto: Lo people “I ‘ll stand and guard the Staw-loh, that no harm comes to my people and no harm comes to the fish that come up to feed them”. With her went her three girls and she holds the smallest one I-oh-wat in her hand. The family dog officially called “Lady” but known by the locals as “Dog Face” followed her back as well. A second child east of her is not getting enough attention and her tears form”Bridal Veil” falls; the 6th highest falls in Canada.  Mount Cheam can keep an eye on her husband; the picture below follows her gaze southward to Mount Baker.


Posted by Stephen Mullock at 9:00 AM No comments:

The Geography We Call Home - The Acre

How did the acre come into being?

Why did the King decide on the configuration of 66 x 660'?  The world 700 hundred years ago was quite a different place, turns out, the "acre" was based on a day's plowing by a team of oxen.

Now, turning a plow around was a lot of work and so a long straight away of 660', called an acre-length, was welcome.  That is why these parcels were long and narrow.  If you have seen the movie "War Horse" you can imagine the labour.  By mid-day a 1/2 acre could be plowed, the team was feed and rested, before, finishing another 1/2 acre in the afternoon. What back breaking work that must have been!

The acre remains 43,560 square feet in size but today the shape of an acre can vary.

In Chilliwack* the 66'  "acre-width" or "chain" has been used in many parts of the City with the result that lots 66' wide are common.

Is it time for the "acre' to be replaced with the "hectare"?
Posted by Stephen Mullock at 4:50 PM No comments:

Wednesday July 11th, 2012 A small band of 9 hikers (Hermann's Hikers)  assemble in a pull-off to the side of the highway just past Spuzzum, B.C. about 50 km north of the Town of Hope. The roar of big transports seems to magnify in this part of the Fraser Canyon. We take moment to read and appreciate the new Tikwalus Heritage Trail signage (April 2012) before heading off into the forest. The map shows the 13 kilometer round trip we are taking and the 788 meter elevation gain we will climb. The day is clear and still cool as we are on the west side of the slope and in shadow. The trees seem to welcome us as we begin our ascent.


"The air" one of my companions remarks, "is so clean". Travelling through valleys of deep green to viewpoints giving glimpses of the Fraser River below, to the fine plants that dot this landscape with colour it is easy to understand why this would be regarded a spiritual place. Every step seems to take me further and further from the everyday trials and annoyances that seem to beset one. I feel my heart and eyes start to open to the splendor of the forest. 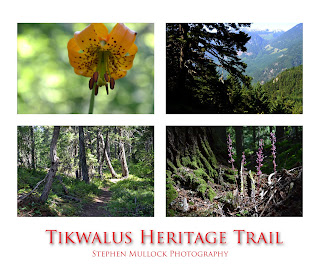 The Tikwalus Heritage Trail, also known as the First Brigade Hudson Bay Company HBC trail, enjoys a special, well deserved heritage status.  It is here that the Nlaka' - pamux and European first work together.  In 1847   the Hudson Bay Company is desperate to find an alternative route to the Columbia River now that the, American, Oregon Territory has been created. Alexander Caulfield (A.C.) Anderson is given the task of finding a way to connect Fort Langley to Fort Kamloops and the rich trapping areas in the northern part of what is then known as New Caledonia. Anderson forms an alliance with Chief Pahallak to improve the arduous  Tikwalus Trail - with some path clearing and widening perhaps, the 400 pack animal and 50 men trains might be able to make it through.  Through the winter Chief Pahallak make the preparations with tools left for them by the HBC.

The HBC come back pleased with the amount of trail work done by Chief Pahallak and the Nlaka' - pamux people. Over the next two years, 3 mule trains of men, animals and furs are brought through these forests onward to Fort Yale, where the furs could be ferried to Fort Langley and eventually shipped to Europe.  After this, an easier route to the interior of the Province from Fort Hope was located and given preference.

After the HBC use of the trail, it reverts back to the uses the First Nation people of the area had enjoyed for thousands of years.  Hunting deer and harvesting some of the 300 species of plants along the trail to give sustenance; berries, mushrooms and the ever important cedar.  Along the trail, remains some of the "culturally modified" cedar trees used in so many ways. The tough outer bark was became roof and floor materials and the fibrous inner strand material; clothing, baskets, and mats.

This is also a place for contemplation, renewal and perhaps if one is lucky finding one's shna.m spiritual helper.


In 1858, a dangerous and dark period of time fuelled by the greed for gold begins.  I have touched upon this in a previous article called Gold, Alchemy and Yale Today.  Very quickly the canyon becomes home to up to 30,000, mainly Californian, gold miners overrunning the Nlaka' -pamux people destroying salmon beds and generally tearing up the countryside.  The nearby town of Yale becomes known as "the wickedest little settlement in British Columbia" "a veritable Sodom and Gomorrah" of vice and violence and lawlessness".  Very soon after, armed conflict between the miners and first nation people breaks out.  Americans, form local militia groups and the "Canyon War" starts to heat up.  To avoid the perilous Black canyon and ambush, the Tikwalus trail once more finds usage by non-natives.
On our hike, we find a number of settlement indicators, the foundation of a building, the fireplace hearth of "Lake House" and a number of pots, stove pipes and pans that we imagine extend back into this precarious time of "gold fever'.

Governor Douglas in 1858, quickly creates the colony of British Columbia to quell any thought of Americans annexing New Caledonia.  In a very real sense the Province of British Columbia is forged from the events that happen here in this narrow part of the Fraser Canyon.

Turning away from the historical significance of this trail, our group is reminded that this is living forest and that nature has its own destructive forces as evidenced along the trail in the form of fire and wind damage.  We come to a clearing of types, a blanket of young green trees and undergrowth under the remains of a dead forest scorched by some fire that must have roared like an inferno along the ridge we are walking along; surreal and beautiful all at the same time.


At the top of the climb we find a pleasant camp site complete with an outhouse, a food cache and seating. The views of the Fraser River and canyon below are our reward for the 3.5 hours needed to ascend the trail.


The Tikwalus Heritage Trail is well worth a hike and the status that has been conferred upon it. The signage is excellent and I'd like to give thanks to all the groups that contributed to making this such a thoughtful experience.

Posted by Stephen Mullock at 5:37 PM No comments:


Air quality is important to everyone that lives in the Fraser Valley especially to those of us in Chilliwack and the eastern Fraser Valley. It is not that we care more, in fact, our air quality is similar to that of Metro Greater Vancouver, but, poor air is more visible here across open farmland against our mountain backdrop.  It interferes with our appreciation of our beautiful views.  We want our skies to be clear blue as shown below. Alas, the picture above was taken early this morning at about 6:30 a.m.; it shows some of the poor air visibility being caused, in part, by forest fires burning in the United States.  Hopefully, these fires will soon be put out, I wish our American neighbours well, and the wonderful air quality this farming community usually enjoys can return.

How can we improve it and do you go about checking the air quality?  Here are a few sites:


Chilliwack has some of the best air quality in the world.


Posted by Stephen Mullock at 2:29 PM No comments: