Ed Begley Jr. and Me 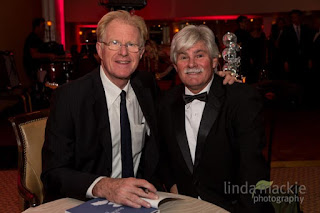 I look pretty excited in this Linda Mackie photograph of Ed Begley Jr. and myself at the Real Estate Foundation of B.C. Land Awards last Friday. I was. Ed Begley Jr., well known actor and environmentalist, was the guest speaker. Taking a "you can make a difference to sustainable living right at home" stance he fuelled the imaginations, in a sustainable way, the audience and me alike with his thoughtful remarks.
I had some wonderful duties that evening as well, with ex-Governor Barry Brown-John we presented the Land Champion Award to Richard Hankin a man who was a driving force in the creation of the 29,000 acres of parkland Metro Vancouver enjoy today. For all the great projects nominated in B.C. and the finalist check out http://www.realestatefoundation.com/node/438 .
Ed Begley Jr., shown above autographing my copy, has an interesting book as well "Guide to Sustainable Living" - it is worth a read.
Imagine living here...

Posted by Stephen Mullock at 11:20 AM No comments:

I came across this lonely old building in the woods close to the Kilby Museum in Harrison Mills B.C. this week and was curious about its past.  I have been told that it was an Old Mill but I am still awaiting clarification about this. Abandoned and broken, at one time, its builders took care to provide gentle arches to the door and window frames and thick cement walls constructed to withstand the tests of time.
Today, more than a 100 years later the interior walls have been tagged by modern artists/vandals and the site is overgrown as it returns once again to nature. 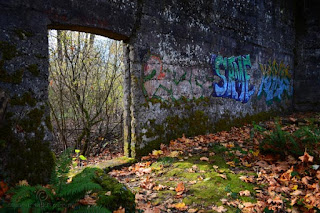 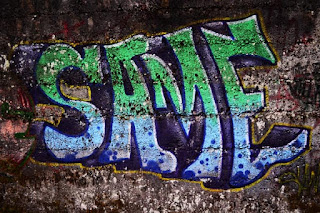 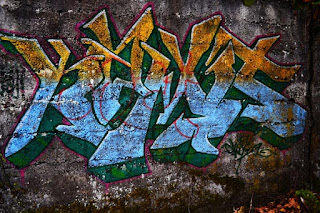 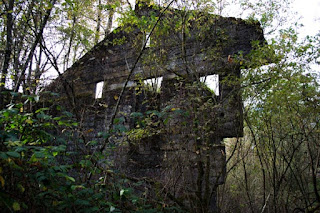 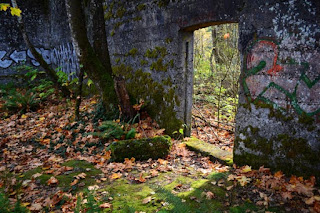 This building was connected to the Harrison River and these old pylons still stand like a forest of totems bearing witness. 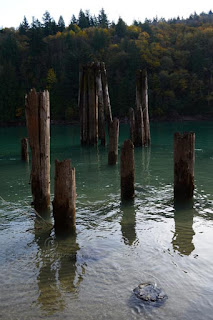 Up until 1906, when a railway was built through Chilliwack, the Harrison River served as a major water route from Chilliwack to the Canadian Pacific Railway located here in Harrison Mills.  Agricultural goods would be shipped daily from the farms in Chilliwack to Vancouver.  Passengers would disembark and board the CPR train for comfortable passage.   There is plenty of magic still left over from that time period in Chilliwack, Agassiz and Harrison. 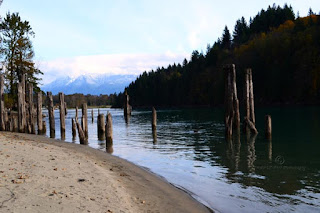 There is an art form in the telling a story well.  A skill to be learned from hearing proper narration.  Chilliwack was treated last evening to a master of both; Stuart McLean visited the Chilliwack Cultural Centre to a packed house of the young and old.  I had seen Stuart, oh a couple of years earlier, in Vancouver, it was his Christmas show.  My daughter had bought the tickets but at the last moment was unable to attend.  Did we want to go?  Were we interested?  As if she thought these die hard Vinyl Cafe fans could not say no.

That Christmas Show was such a nice event, McLean, folksy and wise with a gentle humour advancing thoughts on the foibles of people, how much we are alike, how fragile we are, how love is the way of strength - all poignant and beautifully delivered. Would his visit to Chilliwack be as good?

My wife, Gail, had arranged for seats centre of the stage and we were soon bumping our way down the aisle to our assigned seats.  We noticed that it was an older crowd for the most part, long time CBC listeners, but here and there were a sprinkling of kids and teenagers.

Suspended from the stage ceiling was the banner above. I wondered what "non magnum sed parvi" meant.  I thought, guessed that is, that maybe it meant "don't be full of yourself" but I googled it later and I'd like to believe it means "no small magic is unimportant".  It is probably explained at the Vinyl Cafe website but I am not going to look for it now that I have thought of my own explanation.

The "1994" I later learned was the year the Vinyl Cafe first went on the road - its first show being in Picton, Ontario.

The lights went down and after a brief introduction we listened to the magic of Stuart's first story, casting a spell of images and wise cracks in that "Jimmy Stewart" style of voice.  There is no stutter like the one actor Jimmy Stewart sometimes had, but, there are voice inflection similarities; long on the pause after a character comment but rapid fire on the description.  My sister calls him Jimmy Stewart McLean.  Whatever you want to call him it is a way of speaking that is as endearing and interesting as his stories.

The musical guest of the evening was none other than Harry Manx a talented guitar, banjo, mohan veena and lap slide guitar player.  His bar room voice intoning better days with assistance of a crack backup band.  I have a couple of CDs from Harry Manx and Kevin Breit and recommend "In God We Trust" and "Jubilee".

The evening evaporated only too quickly what a treat to have a Cultural Centre like this in Chilliwack that exceptional talents like Stuart McLean and Harry Manx can perform in.  To check out other productions at the Chilliwack Cultural Centre click here.

Stuart McLean and Harry Manx are both worth seeing and have a number of concert dates in British Columbia I would suggest you see them soon.

Posted by Stephen Mullock at 9:22 PM No comments:

Mornings of late have awakened to thick banks of fog hugging the ground, transforming what is known, into a much more surreal and mysterious world.   Landmarks such as Mount Cheam (pronounced She-am) and Lady Peak (locally known as Dog Face) once provided navigational guidance to early explorers and the First Nation people, and today, many Chilliwack, Agassiz and Harrison residents use them much the same way.   We look for the Cheam's pyramid head and the Dog Face as we travel the Fraser Valley.  When we see them, even if it is only a glimpse through the fog, in that instance, we know where our home is.
Posted by Stephen Mullock at 8:54 AM No comments:

Last night I was driving my daughter to the bus depot when we spotted the wonderful cloud formation shown in the above photograph. It reminded us of a large eagle rising above Sumas Mountain with wings outstretched as if in flight.  One important advantage of Chilliwack* life is the close proximity of the USA border and the shopping and outdoor opportunities Washington State offers.  The Sumas border crossing is an easy 30 minute drive from Chilliwack.  My prediction is that the tolls on the new Post Mann Bridge will send more and more Valley shoppers south to the selection and bargains found in nearby Bellingham.  The eagle does indeed rise over the Valley.
Posted by Stephen Mullock at 10:48 AM No comments: