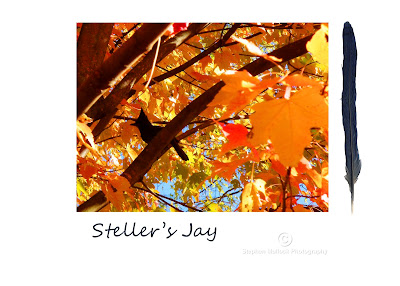 The Steller's Jay is often incorrectly called a Blue Jay in British Columbia after all it is mainly blue except for its coal black head and neck.  It is not a Blue Jay.  It is a rather feisty, squawky, fleet flyer and the provincial bird of the province of British Columbia  since 1987.  Common to the Chilliwack* Fraser Cheam area Steller's Jay loves to scold and heckle; the one pictures above was taken in my backyard Norwegian Maple Tree caught here in full fall colour.  I recall that it had a lot to say. I thought for a time this bird was called a "Stellar" Jay.  I reasoned that as the stratosphere goes from dark blue into the blackness of space this was a fine and proper name for such a bird whose plumage follows a similar pattern.  Wrong.  Turns out this name has a much more remarkable story attached to it. Georg Wilhelm Steller (1709 - 1746) was a German born naturalist and part of Vitus Bering's original crew; the first Europeans to winter on the North Pacific Coast of North America.  Bering, a Danish born Russian explorer had been encouraged to explore the northern Pacific by Tsar Peter the Great. Having crossed what we now call the Bering Sea he sighted North American soil on July 17, 1741 and was congratulated by his men.  He told Georg Steller, "We think now we have accomplished everything, and may go about greatly inflated, but they do not consider where we have reached land, how far we are from home, and what may yet happen. Who knows but that perhaps trade winds may arise that may prevent us from returning? We do not know this country, nor are supplied with provisions to keep us through the winter."  Prophetic words.... What of Georg Wilhelm Steller?  Like a scene from Master and Commander he had to beg Bering to give him a frantic ten hour period so that he could go ashore and catalogue an array of creatures never known to Europeans before then. One of these was Steller's Jay. Months passed, summer became fall, July, August, September, October with the hardships of winter in a new land fast approaching and scarce resources on board. Vitus Bering, became ill turning over command to his second in command Sven Waxell.  A perilous situation far from home, Waxell wrote, "By now so many of our people were ill that I had, so to speak, no one to steer the ship.  Our sails, too, had worn so thin that I expected them to fly off at any moment.  When it came to a man's turn at the helm, he was dragged to it by two other of the invalids who were still able to walk a little, and set down at the wheel.  There he had to sit and steer as well as he could, and when he could sit no more, he had to be replaced by another in no better case than he...Our ship was like a piece of dead wood, with no one to direct it. We had to drift hither and thither at the whim of the winds and waves.  I tried to instill courage into the men, appealing to them; for there was no question of exerting authority in such a situation, where desperation already held sway."   It was decided on November 4, 1741 to anchor at what they thought was Russian territory but was actually some 175 km away.  Unable to anchor properly due to the harsh conditions of wind and surf the ship was eventually destroyed and the crew forced onto an island. Waxell wrote "Our plight was so wretched that the dead had to lie for a considerable time among the living, for there was none able to drag the corpses away, nor were those who lived capable of moving away from the dead.  They had to remain lying all mixed up together in a ring with a little fire in the centre."  The death toll mounted with the blue foxes eating the hands and feet of the corpses before they could be moved away. Commander Vitus Jonassen Bering passed away December 8, 1741 on this isalnd today called Bering Island fulfilling his deepest fears.

From the wreckage of the ships the crew built a fragile craft and 14 months later returned to the Kamchatka mainland of Russia.  It is noted that Georg Steller's care and ability to locate greens and animals necessary for the remaining crew helped them survive the winter.   The naming of the Steller's Jay has quite a history and comes with a tale of great distress, hardship, courage and perseverance along the Bering Sea. Source: First Invaders The Literary Origins of British Columbia by Alan Twigg 2004 Ronsdale
Posted by Stephen Mullock at 5:33 PM No comments: