Part Two: The Spirit Caves of Yale BC

Continued from Part One: The Spirit Caves, Yale BC. The province of British Columbia is given birth from the Fraser Canyon War.  As the dreams of quick riches fail to materialize the miners depart, the gold rush is over - calm is retored.

Almost as if a dream was lifting the terrible images of this area at war seem to disappear. I am once more in the moment with breath, bone and muscle slowing moving me towards the top. There is no hurry. 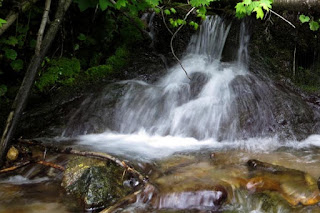 We come to a lookout and see the Fraser River snaking through the canyon below.  Vantage points  like this one were used by the Yale First Nation people to keep a watchful eye against marauding tribes travelling up the river looking for slaves. 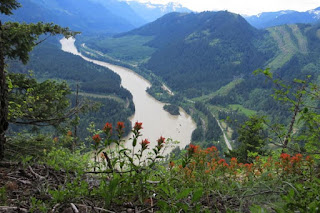 The trail is narrow and steep changing quickly from soft forest trail to rock, sand and pebble. It is the later material that requires the most attention as it tends to give way at critical times. Poles are recommended for additional support and stability. 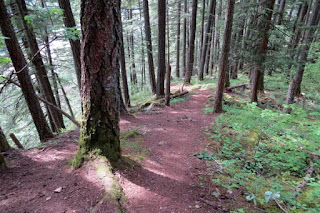 Below are a couple of odd looking plants, unfortunately I have no idea of what they are.  An excellent book in this regard is "Plants of Coastal British Columbia including Washington, Oregon & Alaska" by Jim Pojar and Andy MacKinnon. 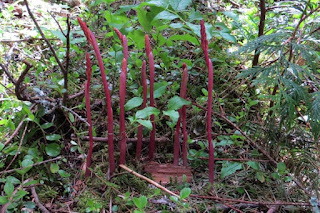 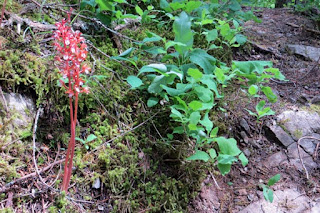 There must have been quite a windstorm as fallen trees block the trail in a number of locations requiring our group to either clamber over top or duck under them.  After about 2 hours we come to a forested peak and here we have our lunch. Looking around you can see how the forest is changing - it is here that the coastal and interior forests meet. 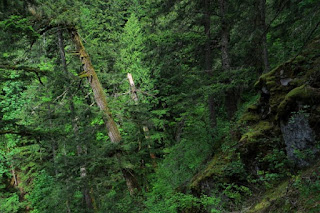 The Spirit caves are best seen on the slopes furthest from the trail and vary in size, there are openings large enough to provide easy access inside. I am content to remain in the light.


We find some snow in one cave even this late in May. Fortunately, the air is still - no ghostly voices arise from the toothless mouths of the Spirit Caves on this day.

Posted by Stephen Mullock at 7:16 AM No comments:

Part One : The Spirit Caves, Yale BC 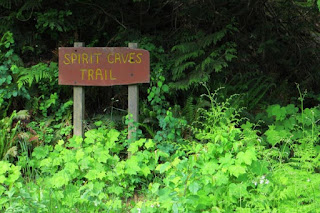 Yeah, with underbrush tugging at my pant legs I was climbing once more, in a party of 6, this time towards the Spirit Caves near Yale, BC.

"When will we be through this crap", I thought, with more than a little frustration. At least it was dry, wet underbrush is miserable.

No one in our bunch had ever hiked up to the Spirit caves, still, Internet directions and maps made it seem like it would be a walk in the park. A couple of my buddies had new GPS devices showing both the trail and our location - the fact they did not quite sync up was of no concern of mine. There was only one trail, my thought was just stay on it and climb up to the top.

Thankfully, we soon clear the thick underbrush and entered into the forest. The path is narrow and a single person file soon develops. I took the rear as I like taking pictures. Photography at the front of a line is a pain for a couple of reasons, you're bugging other people by slowing down the hike and you rush the shot. It is at the rear that you want to be if you are armed with a camera. 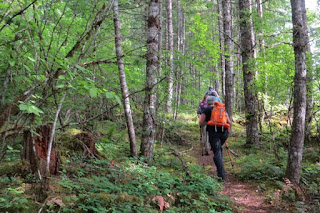 One thing, have the team carry whistles, front and back of the line, so that positions can be calculated. One blast of the whistle means "where the hell are you", 2 means "I'm coming your way" and 3 "can you give me some help here". Okay walkie talkies work so long as they are charged. 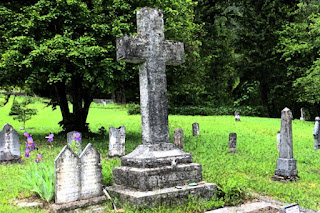 It seems ironic that the Spirit Trail starts right across the street from an old cemetery like some sort of apparition highway.  According to the Net, the caves had been named because of an eerie haunting noise that rises when the wind is blowing and yes there is plenty of reason there might be ghostly unrest in the town of Yale. Human greed, in the form of a gold rush that started in 1858 transformed the sleepy Hudon Bay Company (HBC) fur trading post, Fort Yale, into one of the most crazed, frenzied and evil spots on the Earth for a time. It is called "the wickedest little settlement in British Columbia" "a veritable Sodom and Gomorrah" of vice and violence and lawlessness".

Murder, rape, genocide, dismembered bodies floating down the Fraser River are all part of the local lore as an estimated 15,000 people, mainly Americans from San Francisco descended on Yale like a plague. So many people arrived on these river banks that for a time, Yale was the largest city west of Chicago and North of San Francisco.  Prospectors and the First Nation all piled upon each other along these narrow shoulders of the Fraser River.


As speculation fuelled the ravenous minds of the miners the Indian population was roughly handled, dispossessed of their lands; tensions grew and warfare began. A bloody "Indian War" claimed a number of lives on both sides and an American solution of militia action commenced. At some point, gold flecks are found in the graveyard alongside the Fraser so all the bodies were dug up, moved and buried a second time in the cemetary across from the trail called Yale's Pioneer cemetery.

Meanwhile, back in Victoria the government of this British colony finally wises up and realizes that there are now more Americans in the colony called New Caledonia than Brits/Canadians and, with an American militia Yale bound, the Yanks might decide to take everything and not give it back. Let's not talk about Hawaii.

Yale has perhaps the most colourful history in the BC and if spectral beings roam our world Yale seems as likely a spot as any. I pick up a rock along the trail it seems soaked in blood.

The eastern Fraser Valley towns of Chilliwack, Agassiz (Kent) and Harrison Hot Springs as well as the Fraser Canyon communities of Boston Bar, North Bend and Yale offer a rich history surrounded by both field and forest.

Posted by Stephen Mullock at 11:45 AM No comments:

Floods and the Fraser Valley by Stephen Mullock RI

It is common this time of year for people to, stare nervously at the Fraser River and, wonder if another flood like the ones in 1948 and 1894 can happen again.  I have written a little about these historic floods and the actions taken to alleviate future floods in an earlier post if you are interested.

The Fraser River is British Columbia's longest river with a length of 854 miles draining an area of 85,000 square miles a size larger than the country of Spain.  Along its entire length are snow capped mountains of several ranges including the Rockies providing great skiing in the winter and an unpredictable run off in the spring.

This year, the Upper Fraser has a snow pack of 129% of the annual norm still the Lower Fraser through the Fraser Valley is expected to see normal seasonal flood risks. Of course, the river discharge depends on more than the snow pack; heavy rains or a very hot weather can complicate matters.


﻿
After the 1948 flood governments recognized that seriousness of a reoccurring flood threat and stronger dikes were built to elevations 2 feet above the 1948 high-water peak. Other helpful measures that lessen the flow into the Fraser River include the diversion of the Nechako River and the construction of a number of water storage areas along the Fraser for hydroelectricity production. Still, there remains a sense of nervousness amongst the locals, some years, when the mighty Fraser River begins to rise in the late spring.

There are a number of issues surrounding the potential for flooding which affect building construction and placement.  The use the services of a local Realtor or a professional member of the Real Estate Institute of British Columbia is key when looking to purchase in this area.

Posted by Stephen Mullock at 2:19 PM No comments:


One of the best things about living in the eastern Fraser Valley is the access to the local hiking trails. This past week a small hiking group and me climbed Dewdney Mountain, height 3,051', near the community of the same name.


Locally, it is also called Hatzic Mountain but the Dewdney name has quite the history attached to it as well. Edgar Dewdney came to British Columbia in 1859 as a surveyor and set to work laying out New Westminster.  Later he was called upon to establish a trail for the many prospectors that were seeking their fortunes in the gold rush.  The importance of this trail was also to establish British control over the colony at a time when annexation of the area by a flood of American miners seemed a distinct possibility.  Heady times and Edgar Dewdney was very much a part of them running for politics and serving as the representative for Kootenay, later being appointed to Sir John A. MacDonald's cabinet and after a number of posts returning to this province as its' Lieutenant Governor.

Our job was a lot easier just to climb it and enjoy the day - as you can see we had beautiful weather. Directions to this trail can be found at this Club Tread site. 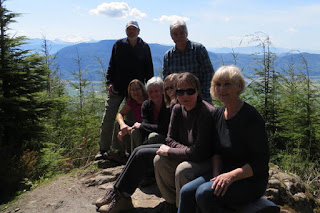 There were a number of surprises which included meeting a 90 year man hiking the path and one disappointment; a logging road being cut into the mountain which has obliterated part of the trail. Still there were plenty of plants, streams and views to keep us happy on this day. 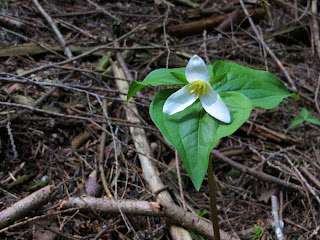 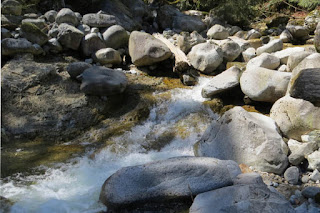 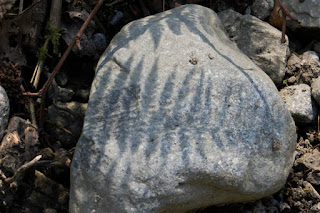 At the top is a small cabin erected by the people of Dewdney and a fine view of Mount Baker in nearby Washington State (shown above). 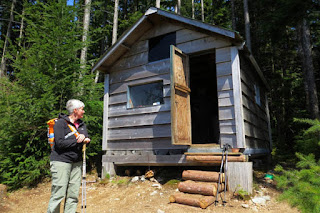 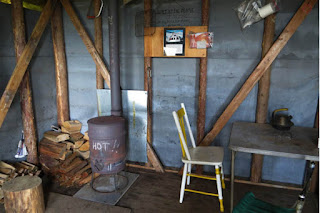 On one wall of the cabin I found written, below a cooking pot, the following:


Posted by Stephen Mullock at 11:34 AM No comments: