Summer is fast approaching and the question of what to do with the kids could involve a day trip or two. A journey up the Fraser Canyon to Yale, the Alexandra Bridge and Hell's Gate is a great way to see our province, learn some history and otherwise amuse oneself.  There are three locations on this day trip but feel free to explore them individually.  All can be easily covered in a day, and, if you leave early enough from Chilliwack (say 10 am), you can be back home before supper.

Ever wondered what is beyond Hope?  The answer is Hell's Gate.

In 1808, British explorer Simon Fraser gave this area it's colourful name.  I would assume that Simon Fraser was pretty sick of the temperamental, wild, raging namesake river and looked on the "gates" as just another lousy hurtle to conquer or die trying.  He said of this narrow passage that " it is a place where no human should venture, for surely these are the gates of Hell."

Poor Simon had been sent on a journey in the wilderness to find a nice calm river from which the fur traders would be able to send their beaver pelts and furs down to the coast. What he found was a beast of a river - the Fraser.  A river that no boat could go further inland than present day Yale.  Still he named the river after his family's name and today, to boot, we have a major university named after him as well.  Speaking of names, he decided to call this new territory "New Caledonia". The Roman name for Scotland being Caledonia.

We took the aerial tram over the Fraser River, this takes just a few minutes and offers some very views of the canyon and the river.  We were informed that as of this date 170' of water was gushing through the gates. The highest recorded water level is 205' which took place in 1948, a major flooding event for the province.

Across the water is a professional series of buildings offering background on the fisheries, history and exciting adventures that are offered today in the form of white water rafting.  There is also a large souvenir/gift shop and several eateries.  The waffle ice cream cones look great.  We chanced upon some live music as it was the weekend and listened to a beautiful rendition of  Neil Young's "Harvest Moon" by our favourite local band The Earth Men.

Hell's Gate is a good way to ease into the day's adventure as it starts with an aerial ride.  It is the furthest destination so afterwards you are working your way back to the Fraser Valley, all the major driving has been done. 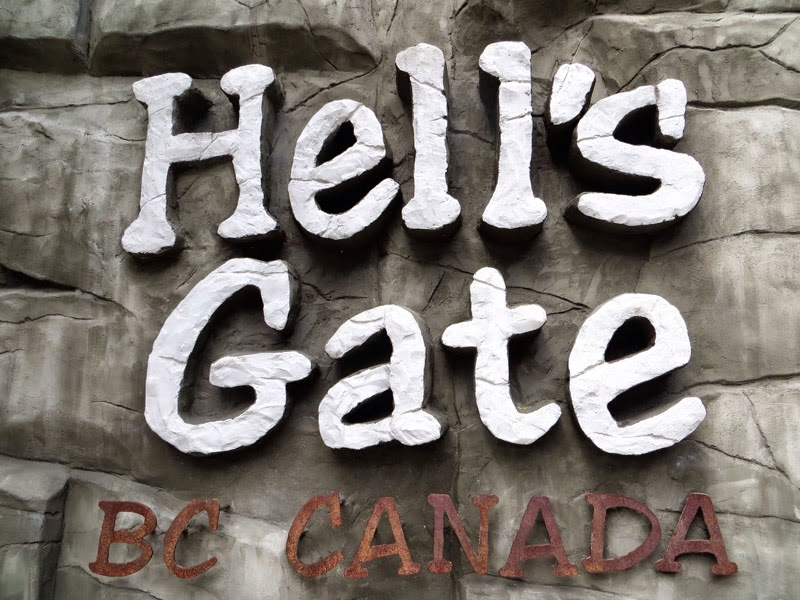 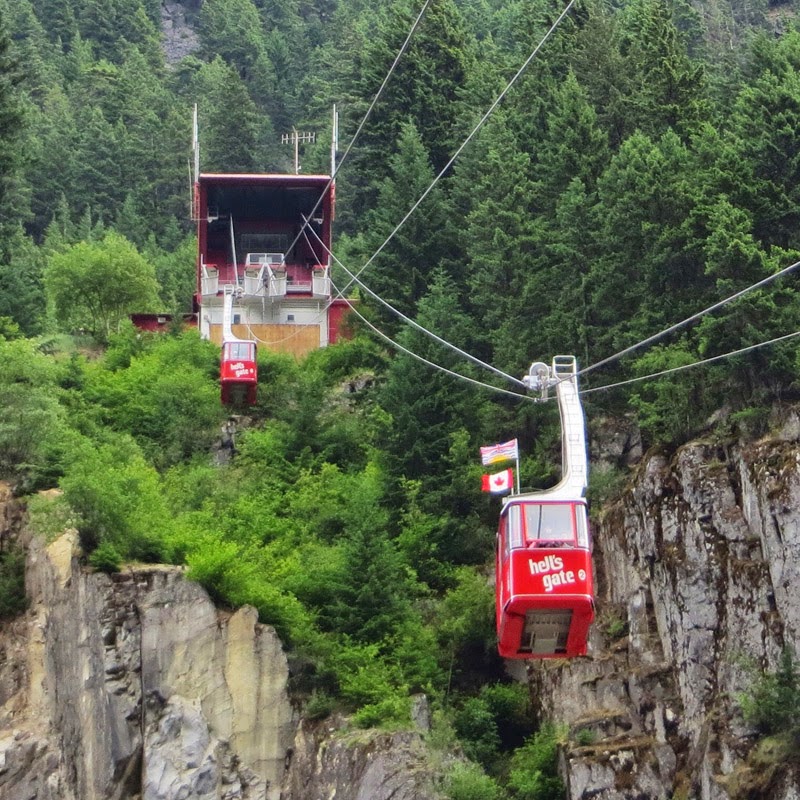 There have been 3 Alexandra bridges, one you will use to cross the Fraser River, another long since destroyed and a pretty little walking bridge built in 1925 that is your next stop.  A 10 minute walk through the forest, over a rail line is all that is needed to get here.  No washrooms so be sure to use the outhouses near the park entrance, or, better yet the one's at Hell's Gate.

The concrete arches and the bow of the metal decks are quite lovely and remind us of a time when more pride was shown in road works.  The large metal embossed circular shields have been removed you'll find one of these at the next stop the Yale museum.

Meanwhile, this is a great place to have a sandwich, sit down and watch the river flow.

The Fraser Canyon is a fascinating place with a rich first nation and settler history.  It was along this stretch of water that the Fraser Canyon Wars occurred, with atrocities committed on both sides.  In reaction, the colony of British Columbia is created, (the name New Caledonia was scraped as it was already being used in another part of the world), added protections were given to the First Nation peoples and peace made.

The conflict was fuelled by gold and the adventurers that sought a quick fortune on the banks of the Fraser River and points further north.  The HBC Fort of Yale was soon overrun by prospectors and the population swelled to over 15,000 people, mainly Americans.  Lawless behaviour caused a lot of friction and for a time Yale was known as "the wickedest little settlement in British Columbia" and a "veritable Sodom and Gomorrah".   Hard to imagine when you look at it today.  As to those gold prospectors - the gold rush died out in this area very quickly but the Cariboo Gold Rush extended interest until 1867.   As to the prospectors?   Some became rich but for most, those that made it out alive, it was an adventure to remember and perhaps best forgotten.

Yale offers a number of nice views along the river as well as a Museum and St. John the Divine Anglican Church the one of the oldest remaining churches on the mainland.  A large garage sale takes place along the side of the highway, there you can buy some fresh bannock - a local First Nation bread. - it is like a scone.

We happened to arrive during a strawberry shortcake party at the Museum. So good.  Afterwards, I wandered over to the black powder people who were demonstrating musketry!  Bang!


This is where your day trip ends.  Just think on this day trip you go past Hope to the Gates of Hell, or Hell's Gate and back - now that is a type of adventure you can brag about.

BE SURE to print out the website ticket discount coupons at the following sites:

Information about the Yale Museum can be found at  http://historicyale.ca/.
Hell's Gate specific information is at http://www.hellsgateairtram.com/

Alexandra Bridge is free more informations is at http://en.wikipedia.org/wiki/Alexandra_Bridge_Provincial_Park
Posted by Stephen Mullock at 9:21 PM No comments: