Gotta Get Me Some Newer Christmas Tunes


Here are 2 newer Christmas songs - at least from this century - about home and hurrying back home for Christmas. There is also a Chris Rea song from 1988, but what can I say it's Chris Rea.  All three, in different ways, are writing about the same things - love and that being together is the best gift of all.

If you have a favourite Christmas song about home that I should know about please send me a comment.

1. Love is Christmas by Sara Bareilles

The Good Lovelies played the Memorial Hall in Harrison Hot Springs this past July 2016 and I was in audience.  A great evening of music so if they are ever in your neighbourhood don't hesitate but go out and see them. I also own their Christmas CD and it is a recommended holiday purchase.

What a great voice Chris Rea and a touching song.


Posted by Stephen Mullock at 3:30 PM No comments:

Naming your child is a big responsibility so you would imagine the angst trying to figure out what to call a colony and future province. Indeed, a great deal of careful thought and consideration. Was that the case of "British Columbia"?

In November 1858, the colony of British Columbia was named and created in a bit of a hurry by Queen Victoria. The gold rush was in full swing and the New Caledonia area as it then called was swamped with fortune seekers mainly Americans. The place is administered by the Hudson Bay Company through a series of forts with limited legal authority. Something needed to be done in hurry and the creation of a colony was the ticket.
What to call this new colony fell to the attention of her highness Queen Victoria. She asked for the maps of New Caledonia. A name which that could have been chosen but the French had already used it for a group of islands in the southwest Pacific Ocean. Back to the maps.

The word "Columbia" she found was quite prominent. Columbia, that sounds good but darn wasn't there already was a country called Colombia? Maybe the Queen thought, "Are all the good names taken"? This is so frustrating. First the French and now the Spanish. What to do? One could perhaps find another word unique to the region but that might delay the tea. Perhaps a "British" added to the front of "Columbia" will serve. Quite right. British Columbia it is.

That explains the "British" part of the name why was "Columbia" on all those maps in the first place?  What is that all about?

Well 300 years after Christopher Columbus landed in The New World the Pacific coast of the North American continent was still being explored by the British and Americans.

If you are thinking "Columbia" must have something to do with Chris you'd be right, a couple hundred years after his landfall his last name "Columbus" has been morphed into a female persona - "Columbia" - America herself.

By the 1730s the name "Columbia" is serving as the female personification for the 13 colonies of the United States of America. The "ia" at the end of Columbia modelled on Latin derived names like Britannia and Gallia. The American national capital becoming the District of Columbia. Her reference is also found at places like Columbia University.

Americans are fond of calling their exploration vessels Columbia.  We sadly remember the Space Shuttle Columbia which disintegrated over Texas in February 2003 killing 7 crew members. In April 1927, an early aircraft called the "Columbia" joined the race to be the first to cross non-stop from New York to Paris. Unfortunately, its' landing gear fell off during a trail run, and while the pilot made a perfect emergency landing, a wing was damaged putting it out of the race. Charles Lindbergh in the Spirit of St. Louis would of course win that race a month later in May 1927.

Our "Columbia" comes from another bold adventure of human endeavour this time in the form of a privately owned ship, the "Columbia Rediviva" most commonly called the "Columbia". In 1790, this was the first American ship to circumnavigate the globe.

A couple of years later, in 1792, Captain Robert Gray, of Boston, sailed into a wide and gentle river basin and named that watercourse the Columbia River after the ship. What a beautiful river it is as shown in the picture I took a couple of years ago. The area quickly became known as the Columbia Country. The Hudson Bay Company adopting Columbia Country for the southern part of their territory and New Caledonia for the north. It was these names that Queen Victoria saw mapped and made her decision upon.

In 1858,  Americans greatly outnumbered the British and Canadians in the colony seeking their fortunes in the gold rush. This in mind perhaps it was a most astute politician decision by the Queen to incorporate an American component into the new colony's name - British Columbia.

Posted by Stephen Mullock at 11:23 AM No comments:


Do you need to have air conditioning in the Chilliwack, Agassiz, Harrison Hot Springs area?

This post will look at the average temperature that you can expect in this the eastern part of the Fraser Valley so that you can make an informed decision about an air conditioning purchase. Comfort, is obviously an individual's decision and yours to make. Budget is equally a concern. 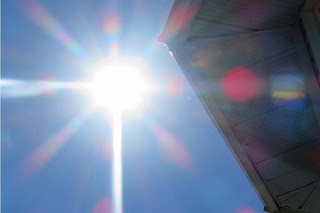 In this article I have made a number of assertions based on my own personal experience, having coped with the local summer heat here nearly all my life, they are: (1) temperatures under 30°C are bearable and easily offset with either fans, a swim in one of our lakes or a movie night out, (2) humidity, while sometimes present does not hit with the same severity as found in this eastern part of North America, thank goodness, and (3) the number of days with temperature above 30°C and the length of heat events should be the guiding factors.

The number of days with temperatures above 30° C also seem to be increasing, in the June to August time period, as well, with 2015 being a standout providing almost a month (26 days) of above 30° C temperatures.

In conclusion, I am drawn to two items: (1) that the average temperatures overall in July and August have increased in a substantive way and (2) this area is experiencing more days with temperatures above 30° C. If air conditioning is a viable option I believe it to be a wise comfort choice to consider.  I do not have enough evidence to say whether an air conditioned residence for sale on the residential real estate market would get its' full installed price back, less, or more but believe I do that return would vary dependent on the time of year and that such a home will sell faster.

As a real estate agent the best time for me to sell a house with central air conditioning is in May, June, July and August when the benefits are most apparent - all you need to do is step in doors  away from the heat.


Thanks to Weather Observers Roger Pannett my brother John Mullock and the Government of Canada (link) for this information.

Posted by Stephen Mullock at 10:37 AM No comments: